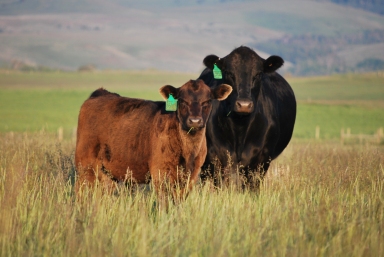 Simmentals in the United States are usually solid black or red, possibly with a white face. They may be horned or polled.

Birthdays are often a time of reflection. This year the American Simmental Association is celebrating fifty years of progressive development of the Simmental, now one of the most numerous breeds in the world.

“From the very beginning, the founders recognized the limitations and weaknesses of the traditional breed association model,” says Chip Kemp, Director of Commercial and Industry Operations for the American Simmental Association (ASA) and International Genetic Solutions (IGS). “As such, they put in mechanisms that discouraged approaches that are built on bias, shady information, and opinion. Rather, from the very beginning they sought to use the best knowledge, facts, and science available at any given time to aid our members in generating commercially relevant seedstock.”

Kemp admits that, like all of us, the ASA has strayed off course on occasion, but has been able to right the course because of the accountability built-in to the organization. In the 1990s, Simmental had lost favor in the industry, and the association and its members were struggling. He says the ASA was able to turn that around with the leadership of past CEO Dr. Jerry Lipsey, who helped the association reconnect to its roots of fact-based decision making and robust and relatable genetic tools that speak to the actual profit potential of commercial customers. That strategy has been continued with current Executive Vice President Dr. Wade Shafer.

“The primary strategy for the future is to make that genetic knowledge more pervasive throughout all segments of the industry so that we are able to ensure greater relevance for our membership and their customers by better meeting the needs of feeders, packers, and consumers,” shares Kemp.

That kind of progressive thinking is rooted around an ancient breed. Simmental cattle originated in the Simme Valley of Switzerland sometime in the Middle Ages. They first became popular in the United States in the 1960s and the ASA was formed in 1968. These Continental cattle are recognized for their muscling, docility, growth, fertility and longevity. They’ve gained great acceptance, particularly since the ASA began strategically promoting the breed’s strengths as a cross with British cattle. That combination aims to catch the value heterosis and maintain maternal and carcass traits.

Simmental bulls range in weight from 2,200 to 2,800 pounds. Photo by Christy Collins.

“At all levels Simmental-influenced cattle, in particular responsibly bred hybrids, are key to adding longevity to British-based cow herds through moderation of size and better feet and leg structure,” explains Kemp.  “It is quite astounding that over the last 20 years SimGenetics have underwent serious selection pressure to maintain the traditional traits of growth and carcass yield and have added serious levels of marbling, calving ease, and even USDA MARC data now says a mature Simmental-influenced female is on par or smaller than nearly all British cow breeds. That is a testament to serious breeders using serious genetic tools to produce those animals that have industry relevance.”

18 million animals in the system

Using the fact-based knowledge that genetic tools provide helped Simmental producers to continuously improve their cattle over the last 50 years. Part of that improvement also comes from shared information—not just great marketing. That’s one of the reasons the ASA and IGS created the new IGS Multi-breed Genetic Evaluation, a platform that represents EPDs from 12 breed associations.

“The introduction of the new IGS Multi-breed Genetic Evaluation (powered by BOLT) has been both a monumental accomplishment and a significant leap forward for the predictive ability of beef producers,” Kemp says. “IGS is nearly double the size of the next largest genetic evaluation in the industry. On top of that, it is the only multi-breed mega database that exists. So to make the move to a single-step software system (to allow for the better incorporation of genomic/DNA information) was unlike any effort to date.”

“It is measurable success, not just hype and marketing campaigns,” he continues. “That is why we bring in over 100,000 animal records a year to our ASA database (second within the industry) and well over 300,000 head per year across the IGS collaboration. This makes the IGS database easily the largest beef genetic evaluation on the planet. Now with nearly 18,000,000 animals recorded.”

The genetic evaluation software continues to be refined and improved, but educating their membership made the transition easier.

“Obviously, there were some animals who experienced some real changes in their genetic predictions. This was to be expected. If we weren’t able to better evaluate the population then what was the point? Some change was inevitable and necessary,” says Kemp.

The ASA hopes to continue to make positive changes and to educate, not only their members but other segments of the industry as well. IGS and the ASA continue to use genetic tools to provide further information about things like maternal merit and carcass value, for example. They also aim to make genetic understanding more valuable to feeders and packers.

“Traditionally, genetic awareness in those sectors is limited to hide color, ear length, and horn status or a myriad of slick marketing efforts that reference superficial understanding that speaks more about revenue than actual profit,” says Kemp. “And if we are looking for someone to blame we should look in the mirror. Frankly, we have not given those sectors tools or measures that they can have trust and faith in.”

He argues that industry members should be using tools like the IGS Feeder Profit Calculator, which can be used to measure actual profit potential of a terminal calf, and by sharing knowledge instead of simply hype. Tools like these have helped set Simmental up for powerful influence across the industry, but beyond just tools, it is a mindset the ASA has adopted.

Change happens. Being willing to accept change and even seek it out to improve has been the name of the game for the ASA. Simmental cattle have some very desirable traits and have had since the breed originated. But it’s the breeders working together for 50 years that have made the Simmental breed in America what it is today. And that is worth celebrating.