In the rural setting of Chandlerville, Illinois, when most boys are playing cops and robbers or watching their favorite Saturday morning cartoons, eight-year-old John Sandidge bought a pair of Simmental steers from a neighbor, a moment when his passion for cattle was born.

A couple of years later, when his father, David, picked up some extra ground, the precocious 10-year-old borrowed the money from their local bank and purchased 15 black baldy pairs for $675 each.

In 2002, when he was a mere 14, he rented an old Shorthorn farm known as Questing Hills. Feeling strongly about the property, a couple of years later, he attempted to buy the place, and raised the necessary money. However, a quirky local ordinance prohibited more than three cloven-hoofed animals per acre, so the deal fell through. The following year, at 15, he acquired a round baler and began operating a custom hay baling enterprise, which he still operates to this day.

By the time he had finished his junior year in high school, Sandidge had already assembled a cowherd of nearly 200 head, running them on leased land, which had become available. Around that same time, a close family friend and Simmental breeder, Alan Edwards, sold him five Purebred cows that had originated from Circle A Simmentals, Mowaequa. A daughter of those cows became his prized “Lola” still in the herd today at 16.  Her genetics became the cornerstone of his operation.

At 18, he began losing most of his pasture leases to groups and individuals who were seeking to purchase private hunting property. Within a couple of years, he was forced to reduce his herd to 50 head. In 2010, he was finally able to purchase 14 acres and buildings, that old Shorthorn farm now that the outdated ordinance was lifted.  As a show of respect, he decided to name his cattle operation after the original cattle farm Questing Hills, calling his operation Bar QH.

Since then, his operation has grown and expanded at an amazing rate. Consider this: today, Sandidge is 28 years old, married to Alicia and the father of two toddlers: Tucker, 3, and Loretta, 2. “She works from home keeping the books, raising our children, and juggling all the other duties of being a farm wife,” he explained. In addition to the help of his wife, he relies on an industrious crew of four full-time men and up to 10 employees during peak seasons. 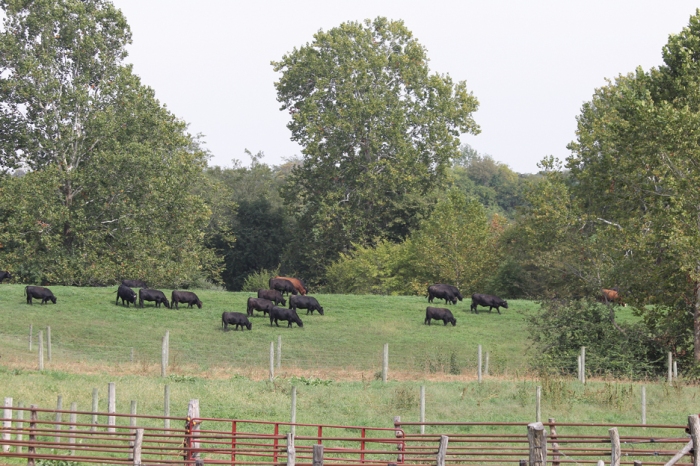 The pair basically run an agriculture mini-conglomerate of nearly 4,000 acres of row crops, and a successful hay business while maintaining a cow herd of roughly 100 head of Simmental, including several bulls producing semen for sale to other breeders. “Typically, we like to bring in about 30 bred heifers per year to help phase out the older females,” he said.

“With the price of farmland around here, which ranges all the way from $7,000 up to $14,000 an acre, I can’t afford to own it. I’d love to buy more ground, but it just isn’t feasible,” he reasons. “Because I’m one of the few guys around here with hay equipment, including a large square baler and a wrapper to improve feed quality, it gives me an edge and unique position when it comes to planting my crops and putting up hay on ground that may not have been otherwise suitable for other crops.  I work with those guys on a cost/share basis — I guess you could call me a tenant farmer. I own less than 2% of the land I utilize.”

Initially, John had teamed up with his dad and older brother, Matt, jointly farming more than 11,000 acres. “Then, I decided to strike out on my own because of all the things I had going through the year,” he explained. “I thought that I could manage my time better on my own and spend more quality time with my family — I’ve always liked being organized.”

He credits his parents, Dave and Linda, for their support. “Dad was always very supportive. Although he wasn’t always in a position to help me financially, he would when he could. He would tell me if he thought something was a bad idea, but he wouldn’t tell me not to do it and would never stop me. When I bought my first round baler he told me ‘I’m not telling you not to do it, but if you make it with the custom baling deal, you’ll be one of the first guys I know of to do it’,” he recounted. “Well, that business exceeded my expectations and I was pumping out 3,000 to 5,000 big round bales of straw during that first year. I don’t get to do much custom baling any more, just because I have so much work of my own.”

He vaguely remembers his dad maintaining a small herd of commercial cows, mostly Angus-Hereford mixed, but his father sold them when his own row crop business expanded. “He did a lot of custom application and farming and sold the cows because he just didn’t have time for them. My brother, who still partners with dad, was not interested in cattle — he’s strictly into farming.”

Some years later, following his dad’s advice, John bred those first black baldy cows to a Salers bull. “That didn’t work out very well,” he reports. “Then Alan Edwards sold me one of his prized bulls. That bull was obviously ‘just the ticket.’ Those baldy cows were good, solid females and when I matched them up with that Simmie bull, I really had something special.”

Edwards is singled out for his friendship and guidance over the years. “I was about 14 at that time. Within a few years, I was up to 100 cows and I try to stay right around that figure, I have had a larger herd here and there over the years, but my cowherd wouldn’t be what it is today if it weren’t for Alan Edwards.” he said.

The Sandidge cowherd includes 60 purebred and three-quarter Simmentals, with 10 Black Angus cows, and 30 Simmental-influenced commercial females. “I’ve always been drawn to cattle and I absolutely love crossing Simmental with Angus. That’s a wonderful blend of genetics for my part of the country. While my main goal is producing show-type animals with performance, it can be hard to match phenotype with EPDs,” he continued. “Sometimes it can be a struggle to determine what is a show animal and what is a good animal. I want to be able to admire my cattle in the pasture and on paper and be proud of both equally.”

His genetics are in great demand at various consignment sales, usually topping the annual bred cow sale organized by Bob and Nick Dwyer at Carthage.  “My market is directed at selling bred females,” he added. “The Dwyers also manage the annual Pride of the Prairie production sale which will be held here at our new Bar QH shop facility on December 17. Last year, 65 heifers were sold, including 20 opens and 45 breds.”

He’s a strong advocate for sexed semen. “That technology has been very successful for us,” he said. “Last year, 85% of the calves out of our heifers were females and we had a 60% ratio of heifers to bulls out of our older cows.”

His bull crop of 10 to 15 head of mostly purebreds, but also including a few SimAngus™, is sold through the Illinois Beef Expo and Jeff Springer’s Value Based Genetics Sale in Iowa. “I met Jeff several years ago after investing in a bull and several heifers. Since then we have owned a handful of cattle together and developed a friendship,” he says. “Jeff is an embryologist and has been a very helpful in improving our breeding conception rates.”

Row crop farming, and his hay business form the backbone of his operation. “I’m up to about 3,800 acres of row crops — heavy on corn, but also beans and wheat on a rotation program. About 2,000 acres of that is under center pivot, and we have about 500 acres of hay ground, although cattle remain are our passion,” he said.

He’s enthusiastic about the value of wrapping. “We made the switch from open sheds about four to five years ago. We’ll bale and wrap it within 48 hours of mowing regardless of moisture. The wrap cuts off the oxygen and holds the moisture and it never spoils,” he explained.

In 2009, after purchasing his large square baler, his hay crop had improved quality expanding sales to larger dairy farms. In 2013, he added the individual bale wrapper to further improve feed quality, and “that has been a game changer” he says adamantly. “Our customers feel that wrapping has helped our hay quality, because it is kept soft and easier to digest. Wrapping has really changed my life for the better.

“I can produce up to seven crops in a single growing season if adequate moisture and warm temperatures hit the right combination. We put up right at 3,000 tons of hay and another 1,000 tons of straw in big square bales. The straw is set dry and we wrap every single bale.” He also bales grass hay from nearby river levees and from the adjacent Jim Edgar Panther Creek State Fish and Wildlife Area.

Sandidge hay is in great demand with most of it sold east of the Mississippi River. He has delivered hay as far south as Florida and Georgia, as far east as New York and as far north as Minnesota and Wisconsin.

John and Alicia thrive on having many irons in the fire, but effectively manage their time throughout the year. They have a strong desire to promote agriculture and try to hire reliable high schoolers and host a college intern to help keep local youth on the farm gaining hands-on experience they can use a lifetime.

Alicia takes time from her busy schedule to participate in their county’s Farm Bureau’s Young Leaders Program, and John may be right behind her. He feels an obligation to be involved with agricultural organizations. “I need to get more active with organizations like Farm Bureau that work to convince the general population that we are not all evil corporate farms. They need to know we are family-based and looking out for everyone’s best interest” he concluded.