This year when Simmental breeders will parade cattle across the iconic green chips of Louisville’s Freedom Hall at the 2014 North American International Livestock Expo one habitual exhibitor will not be entering the show ring with a Purebred Simmental bull on the end of the halter. Instead this year, Barry Wesner will be on the microphone evaluating cattle exhibited by his friends, customers, mentors, and fellow Simmental enthusiasts.

Although Wesner is a familiar face in show rings across the nation, be it the Hoosier Beef Congress or the Simmental Breeders Sweepstakes what many don’t know is the story that led to Barry’s being at those shows. Barry’s proudest moments in the cattle industry haven’t happened in the show ring.

Just three hours north of Louisville is the little town of Chalmers, Indiana. It’s home to a popcorn plant, corn fields upon corn fields, hundreds of wind mills, and Wesner Livestock Enterprises (WLE), where the Wesner family cows graze behind heavy, handmade metal gates on a pasture surrounded by corn and soybeans.

“The farm has been in the family since 1949,” Barry said, “I grew up as a Shorthorn kid. My dad always had Shorthorn cows. At my age I was right there with the European cattle explosion. I wasn’t going to be satisfied with the Shorthorn, so I had Simmys and Chis, did a lot of showing, clipping, and fitting to help pay my way through college.”

Simmental and SimAngus replacement heifers on grass at WLE.

The foundation of Wesner Livestock Enterprises didn’t just happen overnight “I couldn’t have started building this if my dad and grandfather hadn’t been here. My dad was always here, doing chores, driving the school bus, taking care of things. My grandfather — we called him Pop — was a working machine. My dad always jokes that I couldn’t be related — they must have mixed me up at the hospital. Pop he never quit, he was a hard driver, but a fun guy,” said Barry, “Nearly everything around here he welded. He did things the hardest way you could.” Barry’s father, Jim, retired in 1995. He and his wife Alfreda still live on the family farm. 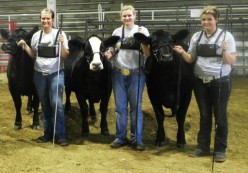 Today, WLE is a team effort, Barry and his three daughters, Courtney, Carly, and Bailey run 50 Simmental, SimAngus, and Angus cows. “Raising three successful girls by utilizing the livestock industry and all the good things it has to offer to teach them about life in general is my proudest accomplishment. These kids helped raise cattle, and these cattle helped raise my kids,” Barry said, “The girls have played a huge role in the day-to-day little stuff, but as they’ve come along, I rely on them heavily to solidify mating decisions and marketing plans, and their successes have helped build the WLE brand. In ten years or so, I hope to step back and hand this operation over to the girls in some way, shape, or form.”

Since 1983, when Wesner joined the American Simmental Association the WLE brand has become increasingly familiar to Simmental breeders. “I couldn’t be more proud of the number of bulls we’ve put in bull studs and bulls that have stood the test of time. When you sort back through a catalog and our WLE prefix is strewn through a lot of those cattle, it feels like a success to me. Those cattle have worked. I’m more proud of that than I could ever be of winning any specific show,” Barry said.

Wesner has had the opportunity to judge numerous shows, but reaching the point of judging the North American International Livestock Expo Simmental Show has taken years of work for Wesner. “There are more than a few people who got me to this point in the cattle business. Bill Couch has had as much influence on me as anyone. Growing up, I always wanted to judge, but I really wondered if some pilgrim from Chalmers, Indiana like me could really do that. I was on the judging team at Purdue. I started small, showed and exhibited, showed a lot of good cattle, persevered, and just by word of mouth got built up to this point,” Barry said, “I can’t emphasize enough the importance of patience and perseverance for these young cattle people just getting started.”

Each of Barry’s daughters went on to judge collegiately as well. At the 2014 NAILE, Carly will serve as Barry’s associate judge.