I Had a Dream

In 1989 Jack McCoy began living his childhood dream and Simmental cattle just so happened to be a part of it. “Growing up, I dreamed of owning acreage and beef cattle, I don’t know where it really came from, I didn’t have much of a connection. My dad was an ag banker and my grandpa was a commercial dairyman.” 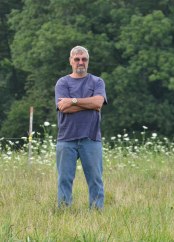 McCoy checking his group of cows on a summer evening

A native of Ohio, McCoy had moved to West Lafayette as division sales manager for Purina. He told a coworker he wanted to have cows—his coworker introduced Jack to the Wesner family who lived nearby. “I bought six cows from Jim and Barry Wesner in 1989 and began living my dream,” Jack recalled, “I wasn’t looking for Simmentals, I was just looking for cows, but the Simmentals got me started. I wanted to breed club calves. I soon learned the club calf business was an act of futility.”

“My wife Susan used to help me when we had club calves, but she had her fill on involvement in the cattle after pulling all of those calves,” said Jack. Realizing the club calf business wasn’t the path he wanted to trek, Jack bought some purebred Angus cows. “I kept my Angus pure and I kept my Simmental pure but I kept reading about crossbreeding and it seemed to be a good option. Now I’m breeding purebreds and percentages and seeing the success of it, selling breeding stock.”

Jack has certainly had some good ones, most notably two popular bulls, the Simmental bull, JF American Pride, and the Angus bull, MSF Journey. “It’s been neat to be linked to the successes. There’s the personal satisfaction and the economic benefit too. It’s a great incentive to get a breeding match and to try and do it again,” Jack said.

Jack’s accountant background comes out when you look through his cattle. He has meticulous spreadsheets of all the data on the cows and calves. His 26 cows graze on fescue mixed grass with clover seeded in the fall. His herd is smaller now, after selling 20 pairs this spring. Although he’s retired, he hasn’t slowed down. Jack has recently taken on a new venture, opening several hearing aid stores across Indiana.

The cattle are pure joy for Jack. “I was a division sales manager for Purina for 18 years, and then when Land O’Lakes came in, I took a position as Senior Credit Manager. I could have the worst days at work, come home and see the cows for 15 or 20 minutes and I would be a new man. These cattle evolved to be therapeutic in a way.”

Jack’s enjoyment of the cattle doesn’t stop with him — he has eight grandchildren who often come to the farm. “I only keep docile cattle. It’s a selling point that you can walk through them out in the pasture, and I cull for disposition. More importantly, I want my grandkids to be able to be around the cattle when they visit.” Two of Jack’s grandsons are passionate about the cattle, his oldest, Taylor, is a junior at Purdue studying agriculture, and Kaden, is eight and lives in North Carolina. Kaden comes to visit his grandpa and helps feed cows, heat check, and ride on the tractor. In 2011 when Kaden and Jack were out checking cows, Kaden told his grandpa he wanted to have cows one day just like him. “I told him to pick one out that he wanted. His eyes got as big and bright as silver dollars,” Jack said, “He picked the smallest heifer in the pasture, and I asked him why he wanted her. Kaden explained that she was little, just like he was—they would make a good match.”

“Kaden is little,” Jack explained, “He was born prematurely and weighed just over two pounds. Things were nip and tuck there for a long time. We celebrated Kaleb’s second birthday, and the next day my daughter called and said something was wrong. Kaleb was rushed to the Children’s Hospital, where doctors discovered that he had a serious disease that was attacking his kidneys. Kaden had a kidney transplant from his dad. Within 24 hours the disease began to attack the new kidney, and it had to be taken out,” Jack said. That was six years ago. Every day since then, Kaden has had to be on dialysis for ten hours a day. The machine is at home and works at night while he sleeps. “When Kaden is older, the doctors will try the transplant again, but this time it will have to be from someone outside of the family. We do a lot of praying for success,” Jack said.

Jack’s dream of owning cattle has been passed on to his grandson Kaden, too. Kaden’s Simmental herd is making strides. His cow named Midnight had another heifer calf this year, Soot, who just so happens to be one of the best heifer calves in the pasture. 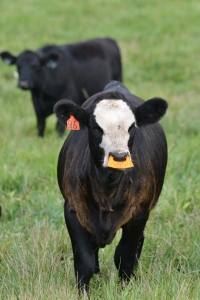 The old granary on McCoy’s farm in West Lafayette