This year Simmental breeders will parade cattle across the bark at the American Royal in front of Shane Bedwell of Fort Collins, Colorado.  As exhibitors lead cattle across the chips and others lean against the indoor hockey arena rails around the show ring, the familiar voice of the announcer will ring across the speakers with a brief bio, “Our judge today is Shane Bedwell of Fort Collins, Colorado. Shane is the livestock judging coach at Colorado State University. He received an associate’s degree in science from Butler County Community College in 2002 and a bachelor’s degree in Animal Science and Industry from Kansas State University in 2004. While in college, Shane was on a nationally competitive livestock judging team where he gained numerous accolades. He was also on the 2003 Reserve National Champion Team at Kansas State University. Shane completed a master’s degree in ruminant nutrition from the University of Illinois in 2007. While at the University of Illinois, Shane served as the assistant livestock judging coach and taught classes in livestock selection. He enjoys youth events and working with students focused on pursuing a career in the livestock industry.”

Many of the younger exhibitors will forget the judge’s name, while older spectators will recall a set of reasons Bedwell gave in 2003. Although most wouldn’t know it from the bio heard around the show ring, Bedwell has been around the livestock industry for much more than just a judging contest or a cattle show.

Bedwell spent his childhood at his grandfather’s sale barn in the small town of Medicine Lodge, in the central plains of Kansas. The network of pens, the scales, and the call of the auctioneer were the familiar sights and sounds of his youth.

“I’ve been around cattle since day one. My grandfather backgrounded calves, starting feeders in the yards and then turning them out on wheat pasture. I became very familiar with the feeder calf side of things,” Bedwell explained.

Today Bedwell and his father run 400 commercial Angus and Red Angus cows, retaining ownership on steers and cull heifers. “We’re focused on the right size of cow, a maternal female but heavy on growth with carcass potential. Since the 1990s it’s been important for us to start with the right cow and then incorporate and build the carcass and the growth,” said Shane of his breeding principles.

The Bedwell’s cattle operation strikes a happy medium focusing on sound cattle, birth to yearling spread, and carcass EPDs. “EPDs are how you progress, how you become elite. But, it’s a balance. Cattle have to walk and be sound. When buying a bull, it would be silly not to utilize EPDs to inject your personal preference.”

Shane Bedwell is a blend of a strong industry foundation and a successful experience in the judging world. In high school Bedwell focused on FFA, and then late in his high school career he became involved in the junior Angus program, showing at the junior nationals. Bedwell made his start in the collegiate judging world after talking a high set at the Kansas Beef Expo. “Chris Mullinix came and found me after the contest. I had just planned on going straight to K-State, but Mullinix talked me into going to Butler,” Bedwell remarked as he fondly recalled his collegiate judging days.

Bedwell is now the judging coach at Colorado State University, “My parents were instrumental in developing a work ethic and attitude for excellence.  My judging coaches, Chris Mullinix and Scott Schaake, advanced my thinking, sharpening my evaluation skills. Without these two mentors I wouldn’t be at this point.”

Bedwell has had the opportunity to judge numerous shows. “The first show I judged wasn’t even a cattle show. I judged the sheep show at my home county fair. My first big show was as the associate for Kevin Jensen at the Shorthorn Junior Nationals. It was a big honor. Kevin is one of those guys like Mullinix and Schaake. He opened a lot of doors for me, taught me how to feel comfortable, how to carry and handle myself, make quick decisions and stick with them. Most importantly, to pick the kind you like,” Bedwell said. 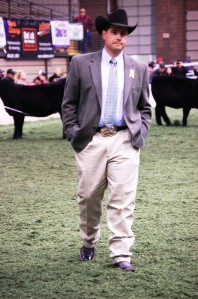 Bedwell evaluating the Junior Percentage Simmental show at the American Royal in 2012.

As Shane travels around the country to evaluate cattle or accompany his Colorado State judging team from one contest to the next, he strives to develop a deep sense of integrity in the next generation of cattle evaluators. “I want to teach them to do it right and, most importantly, make outstanding young people. This experience shapes the person they are going to be in five to ten years.” 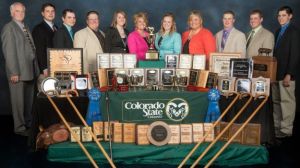